Drafting the Survey in the Field with AutoCAD Civil 3D

Drafting the Survey in the Field with AutoCAD Civil 3D 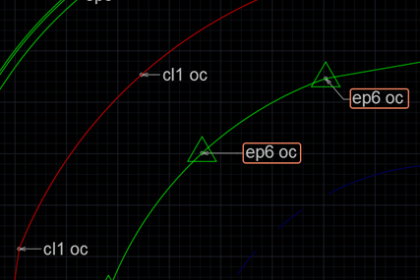 Decades ago, field surveyors started using instruments that ran software that would enable them to store much of the data collected in the instrument. Prior to this point in the evolution of survey technology, plane tables and field books were used. A field book was and is a diary kept by the party chief used for field documentation involving measurements, observations, calculations, weather conditions…any information relevant to the site survey. A plane table was a drafting table set up in the field; as the measurements were manually collected, the linework was drawn up using lead and printed vellum. This process involved a three-man crew; two collecting the measurements and elevations and a third person drafting on the plane table. There was an additional person in the office who would translate what was written in the field book to the final plat or throw a sheet of mylar over the vellum drafted in the field in order to create the final draft of the topo.

The process of recording the drawn aspects of the site survey was transferred to the data collector. After a day in the field, the crews would return to the office, download their points, do whatever post-processing was necessary, and then hand the point data over to the office person to create the drafted version of the topo. The point data was often accompanied with a field sketch roughly showing the features of the site. This resulted in days of connect-the-dots. Field time decreased as did the number of field crews assigned to a job, and office time increased. Somewhere along the way, a genius came up with the idea of line codes, i.e., adding a one- or two-digit parameter to the field description to generate linework as the survey is field collected. This may have added a small amount of time to field surveying, but it cut the time in the office down significantly since most of the linework was generated automatically at import.

AutoCAD Civil 3D supports the field-to-finish process and allows for use of linework codes. These linework codes can be customized to fit an organization’s standards and preferences. On the Civil 3D Toolspace, there is a tab called Survey. This tab contains many of the settings needed to accomplish field to finish. Linework Code Sets would be one of those settings.

In the New Linework Code Set dialog, type a name for the new code set, then click OK. 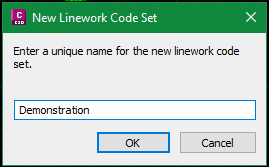 On the Civil 3D Toolspace>Survey tab, right-click on the name of the new linework code set and click Edit.

The Edit Linework Code Set dialog opens. In this dialog in the Value column, the linework codes can be customized. The code set can then be used when importing survey data to draw new surveys. In this example, we will look at the use of each code to see what results it produces when imported into Civil 3D. 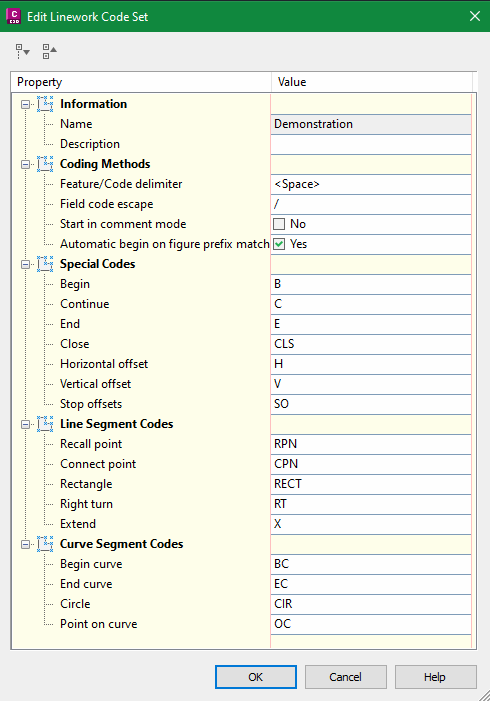 Notice that towards the top of the dialog, there is a field labeled Field/Code delimiter and what is configured in this field. This simply means that after the description is entered, the linework code will be entered prefixed by a space.

Special Codes
Under Special Codes we have the Begin (B) command. This command is issued when initiating the beginning point of a linear object. For example, in the image below, the edge of a building will be collected using the BLD description. Entering BLD B initiates the linework. Notice these commands are not case sensitive. 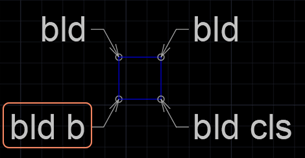 Thereafter, two points are collected using the same description, then the last code of the structure is collected by entering the Close command. B CLS closes the linework for the building.

The Continue (C) command is used to continue the linework of a feature which was previously initiated but never ended.

The End (E) command is used to end the linework of a feature.

With Civil 3D, we have the ability to establish offsets. Establishing offsets is like placing a section template at the point being collected. Below, an edge of pavement point (EP) is being shot.
With horizontal (H) and vertical (V) offset values, we can establish the location of the flow line and top of curb relative to the EP being observed. Thereafter, the offset will automatically be applied to points with the same description. The offset will end when the Stop Offset code has been issued. Notice the below left image with codes initiating the offsets and the below right image with the code stopping the offset.

Line Segment Codes
These codes can be used while picking up linework. There are two codes that are very similar to one another:

CPN can be used when beginning a feature; you can use the code to connect linework to a previously observed point. This enables you to avoid shooting points on top of points just for the sake of creating linework. 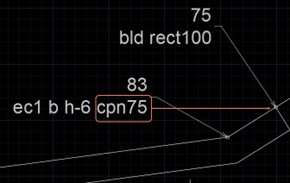 RPN can be used when ending a feature; again, use the code to connect to a previously observed point but at the end of the linework.

The next three codes are used to extend linework without having to shoot more points:

Curve Segment Codes
There are two ways of defining curves in the field.

Using Linework Code Sets enable us to use Civil 3D to translate field work into intelligent objects (figures and points) that we can analyze, visualize, and use to interact with other design objects created by Civil 3D. Implementing linework coding in the field also saves a ton of drafting time. Office staff no longer needs to identify descriptions, connect the points up manually, and fit curves in locations where they are described with field book notes. It enables both field and office staff as a team to be more productive in pulling together existing site features and expediting the delivery of the end product. 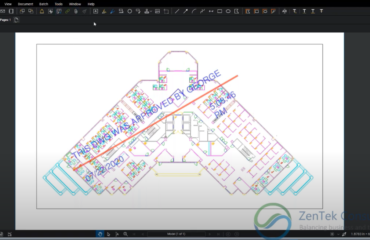 Creating Your Own Stamps in Bluebeam Revu

The Reality of Renderings